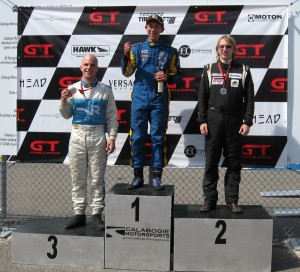 After turning 16 years of age only this April, the Beachburg native Nathan Blok won his first race in Formula 1600 at Calabogie Motor Speedway this past Sunday.

The win has propelled Blok not only the lead in the Rookie Standings, but also the overall the first place position in the Inter-Provincial Series.

Blok qualified for Sunday’s race in fourth position of sixteen drivers only 0.213 seconds off the pole position.

At the start of the race, on corner one, Blok made a pass to take third position staying close to the first and second position cars pulling away from the rest of the field.

On lap 13, the second place car attempted to make a pass on the leader and the two cars collided.

Blok avoided the wreck and moved into first place which he held for the last five laps while pulling away from the second place car, crossing the finish line in first place 1.884 seconds ahead.

Blok was estatic after the race hugging friends, family and sponsors who had attended the event.

Blok attributed his success to his team, Mortimer Racing and to the support of his family and sponsors. “The hard work of my Team have made this win possible for me today and I am extremely thankful to them and to my family and sponsors who have enabled me to be in a Formula 1600.”

Blok follows in the footsteps of another Canadian who also won his first Formula 1600 race at the tender age of 16, current Indy Car driver Paul Tracy.

Blok’s next race will be held at a popular event amongst Canadian race fans the Trois-Rivieres Grand Prix which will be held on August 14 and 15.

Blok is still looking for sponsors to allow him to race the remaining Formula 1600 events that will take place this season.