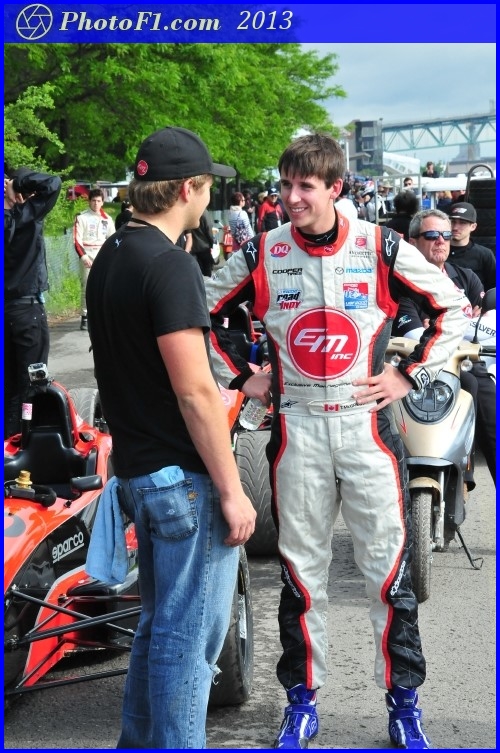 “I am extremely excited to be returning to Exclusive Autosport and partnering with Juniper Networks for the 2014 season.  Michael and Kimberly Duncalfe run an outstanding program and I can’t say enough how thrilled I am to be working with them and Remi Lanteigne (the team’s engineer) again this year.  I look forward to not only learning from my teammates but taking more of a leadership role in the team this year.  My focus for 2014 is my development, consistency and my race craft.  I am looking forward to returning to the Toyo Tire F1600 Championship, the Toyo Tires Formula Tour F1600 Championship and the new Formula 1600 Super Series.  I can’t thank my partners enough, especially Juniper Networks, for making all of this possible,” stated Max Hanratty.

Knowing that competition is fierce in both of the Canadian based championships, Hanratty has been working very hard in the off-season to prepare for what lies ahead.  Hanratty relocated to Indianapolis for a brief period of time to work with one of the industries best trainers, Jim Leo (owner) at PitFit.  When in Indy Hanratty engages in grueling two-a-day workouts alongside Mazda Road to Indy and IndyCar drivers at PitFit’s Indianapolis based training facility.

“I am grateful to have the opportunity to go to Indianapolis and train with Jim Leo at PitFit.  The experience, although painfully difficult, has been incredible.  The training is sport-specific.  Everything we do there has a purpose and is relatable to our needs physically as drivers.  My fitness, along with great equipment, a great team and great partners will help me in my quest for a championship this year,” continued Hanratty.

The “Test Drive Juniper Networks”  presented by SynerComm Inc. is a multi-channel awareness campaign designed to create preferential brand awareness around how Juniper Networks solutions can be utilized to transform the experience and economics of networking in the marketplace.  You can follow Hanratty in the #91 Juniper Networks race car and the Test Drive Juniper Networks awareness campaign throughout the 2014 season on Facebook  (www.facebook.com/testdrivejunipernetworks), Twitter (@MPHanratty) and Instagram.  Select races will also be broadcast on national television. Broadcast schedules have not been released by the series, however are expected to be released within the next month.  (Broadcast details will be announced).

Hanratty will be participating in numerous events in 2014 including high profile events such as, the F1 Grand Prix of Canada, The Honda Indy Toronto, three NASCAR Canadian Tire Series events (Victoria Day Speedfest, GP3R and iCAR), as well as the SCCA June Sprints at Road America.

“Juniper Networks is a Strategic business partner of SynerComm Inc. and has a reputation of building innovative, high-performance, and secure networks. I am excited about our season long “Test Drive Juniper Networks” campaign to spread the word on and off the track,” continued Hanratty.

The Canadian championships kick off May 2-4 at Canadian Tire Motorsports Park with the open rounds of the Toyo Tires F1600 Championship.

The full 2014 Schedule can be found on the Exclusive Autosport website www.exclusiveautosport.ca

Max Hanratty was born July 9, 1993 to Kirk and Marcia Hanratty and resides in Hartland, Wisconsin. He attended Arrowhead High School (2008-2012). He played competitive basketball for many years.  He works at SynerComm Inc. and aspires to be an Indy Car Driver.  Max has an older brother Kyle who lives in Minneapolis.

Max began his racing career in 2012 when he completed a 3-day racing school at Skip Barber Racing School in August of 2012. He participated in the Skip barber IndyCar Academy in 2012 where he finished 10th.  In 2013 he participated in the Skip Barber Formula Winter Series where he accumulated an 11th place overall finish with one podium and 9 top ten finishes.  He made his way to Canadian competition in 2013 where he finished 4th overall in the 2013 Toyo Tires F1600 Championship A-Class with 2 podium positions and 12 top ten finishes.

When the opportunity presented itself for EM Inc. to work with Borland Racing Developments and alongside their American distributors (Cape Motorsports with Wayne Taylor Racing and Cameron Racing) EM Inc. felt it was the right time and a natural fit to move into the F1600 race circuit.

Exclusive Management Inc. (EM Inc.) has already established themselves in the motorsports industry and is well known for their driver management and driver development.  Their drivers have secured numerous race wins, podium finishes and pole positions, rookie of the year championships, a Team USA Scholarship and nominations for Team Canada F1600. EM Inc. drivers are on the podium in over 80% of the races they enter.  Exclusive Management Inc. has had great success in both open wheel and sports cars and have worked with standout drivers Thomas McGregor, Jack Mitchell Jr., Shelby Blackstock, Gregory Liefooghe, Jayson Clunie and David Levine.  EM Inc. drivers are highly sought after in the motorsports industry.

Juniper Networks (NYSE: NJPR) delivers, innovation across routing, switching and security.  From the network core down to consumer devises, Juniper Networks’ innovations in software, silicon and systems transform the experience and economics of networking.  Since being founding Juniper’s sole mission has been to create innovative products and solutions that meet the growing demands of the connected world.  Juniper Networks customers include the top 100 global service providers, 30,000 enterprises, including all of the Global Fortune 100, as well as hundreds of federal, state and local government agencies and higher educational organizations.

SynerComm Inc. (Brookfield, WI) is a leading IT solutions provider (security, network, data center, and mobility) with an information assurance practice focused on audit, assessment, and penetration testing and (FFIEC, PCI, and HIPAA) compliance for enterprises and service providers located throughout the Midwest, North America and the world. For more information, visit www.synercomm.com.